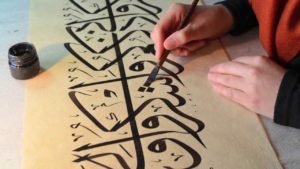 Because of the Muslim’s profound respect and love for the Qur’an, the art of calligraphy was developed early on and reached a very high degree.

Often calligraphy is done in conjunction with decorative motifs, lovingly embellishing what is most sacred and precious.

Over the centuries, many scripts have evolved in various regions of the Muslim world. The main Arabic calligraphy styles are described briefly below.

Kufic is more or less a square and angular script, characterised by its heavy, bold, and lapidary style. Its letters are generally thick and it is suitable for writing on stone or metal, for painting or engraving inscriptions on the walls of mosques, and for the lettering on coins.

Naskh is perhaps the most popular script in the Arab world. It is a cursive script based on certain laws governing the proportions between the letters. Naskh is legible and clear and was adapted as the preferred style for typesetting and printing. It evolved into innumerable styles and varieties, including the ta’liq, the riqa’, and the diwani, and became the parent of the modern Arabic script.

Over the centuries, many scripts have evolved in various regions of the Muslim world.

This is the most important of all the ornamental scripts and is considered the king of styles. It is usually used to write headings, religious inscriptions, and princely titles and epigraphs.

Designed specifically to meet the needs of the Persian language and is still used widely in Iran, Afghanistan and the Indian subcontinent, Ta’liq is a fluid and elegant script.

Excessively cursive and highly structured with its letters unconventionally joined together with no vowel marks. It was developed during the reign of the early Ottoman Turks (16th – early 17th century).

There are other less common types of calligraphy, but by no means less beautiful.