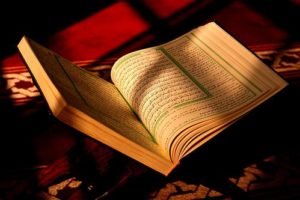 This is certainly the most important revelation for Muslims. Islamic beliefs about revelation are based on the Qur’an (the Islamic holy book). The Qur’an is different from any other book because it is composed entirely of the words of Allah.

In 611 CE the prophet Muhammad was reflecting in a cave when the Angel Gabriel appeared to him. Muhammad was unlettered but three times Gabriel ordered him to ‘read’:

The angel said: “Read! In the name of your Lord and Cherisher, who created, created man, out of a [mere] clot of blood. Read! And your Lord Is Most Bountiful, He who taught [the use of] the pen, taught man that which he knew not.” (Qur’an 96: 1-5)

Gabriel then told Muhammad that he was to be the messenger of Allah. hese revelations continued for the next 23 years until the final revelation:

“This day I have perfected your religion for you, completed My favour upon you, and have chosen for you Islam as your religion.” (Qur’an 5: 3)

Muhammad remained unlettered and the Qur’an was written down directly by his companions, who also memorised it by heart. The Qur’an has 114 surahs, or chapters, arranged in the order decreed by Allah and conveyed by the Angel Gabriel. For Muslims the Qur’an contains only the literal unchanged words of Allah. It is direct revelation from Allah to humanity. Because the Qur’an is the word of Allah it cannot be contradicted.

To preserve the true words of Allah, the Qur’an is always recited for worship in Arabic, because the true meaning of the words can only be found in the Arabic language, however, there are interpretations of the meanings in other languages. The Qur’an is the last and most complete book of guidance from Allah and applies to all people forever. It is still widely memorised to perfection, throughout the globe and is the central part of every Muslim’s daily life. In his sermon on Mount Arafat, Muhammad made it clear that this was the final revelation;

No prophet or messenger will come after him and no new faith will emerge.