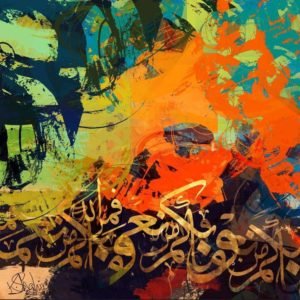 To teach mankind about our Maker and purpose in life, our Lord has chosen certain men to be His Messengers and Prophets. They teach us about the oneness of God, the purpose of our existence and the obligations that are expected of us. They explain what reward we will receive if we fulfill our purpose here and what will be the state of one who disobeys his Lord.

165. Messengers as bearers of good news as well as of warning in order that mankind should have no plea against Allah after the (coming of) Messengers. And Allah is Ever All-Powerful, All-Wise. [Quran 4: 165]

130. O you assembly of jinn and mankind! “Did not there come to you Messengers from amongst you, reciting unto you My Verses and warning you of the meeting of this Day of yours?” They will say: “We bear witness against ourselves.” It was the life of this world that deceived them.

And they will bear witness against themselves that they were disbelievers. 131. This is because your Lord would not destroy the towns for their wrong-doing while their people were unaware (so the Messengers were sent). [Quran 6: 130-131]

71. And those who disbelieved will be driven to Hell in groups till, when they reach it, the gates thereof will be opened (suddenly like a prison at the arrival of the prisoners). And its keepers will say, “Did not the Messengers come to you from yourselves, reciting to you the Verses of your Lord, and warning you of the Meeting of this Day of yours?” They will say: “Yes, but the Word of torment has been justified against the disbelievers!” 72. It will be said (to them): “Enter you the gates of Hell, to abide therein. And (indeed) what an evil abode of the arrogant!” 73. And those who kept their duty to their Lord (Al-Muttaqûn) will be led to Paradise in groups, till, when they reach it, and its gates will be opened and its keepers will say: Salâmun ‘Alaikum (peace be upon you)! You have done well, so enter here to abide therein.” 74. And they will say: “All the praises and thanks be to Allah Who has fulfilled His Promise to us and has made us inherit (this) land. We can dwell in Paradise where we will; how excellent a reward for the (pious, good) workers!”

75. And you will see the angels surrounding the Throne (of Allah) from all round, glorifying the praises of their Lord (Allah). And they (all the creatures) will be judged with truth. And it will be said, “All the praises and thanks be to Allah, the Lord of the worlds.” [Quran 39: 71-75]

25. Indeed We have sent Our Messengers with clear proofs, and revealed with them the Scripture and the Balance (justice) that mankind may keep up justice. [Quran 57: 25]

48. And We send not the Messengers but as givers of glad tidings and as warners. So whosoever believes and does righteous good deeds, upon such shall come no fear, nor shall they grieve.

6. And how many a Prophet have We sent amongst the men of old. 7. And never came there a Prophet to them but they used to mock at him. 8. Then We destroyed men stronger (in power) than these – and the example of the ancients has passed away (before them). [Quran 43: 6-8]

213. Mankind were one community and Allah sent Prophets with glad tidings and warnings, and with them He sent down the Scripture in truth to judge between people in matters wherein they differed. And only those to whom (the Scripture) was given differed concerning it after clear proofs had come unto them through hatred, one to another. Then Allah by His Leave guided those who believed to the truth of that wherein they differed. And Allah guides whom He wills to the Straight Path. [Quran 2: 213]