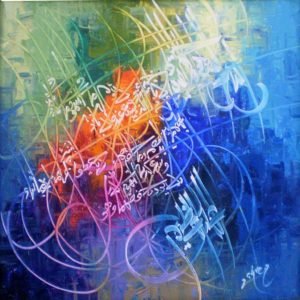 Our Creator informs us about some of His attributes.

13. And whether you keep your talk secret or disclose it, Verily, He is the All-Knower of what is in the chests. 14. Should not He Who has created know? And He is the Most Kind and Courteous (to His slaves), All-Aware (of everything). [Quran 67: 13-14]

48. Allah is He Who sends the winds, so that they raise clouds, and spread them along the sky as He wills, and then break them into fragments, until you see rain drops come forth from their midst! Then when He has made them fall on whom of His slaves as He wills, lo, they rejoice! 49. And verily before that (rain) – just before it was sent down upon them – they were in despair! 50. Look then at the effects (results) of Allah’s Mercy: how He revives the earth after its death. Verily, that (Allah) (Who revived the earth after its death) shall indeed raise the dead (on the Day of Resurrection), and He is Able to do all things. [Quran 30: 48-50]

59. And with Him are the keys of the unseen, none knows them but He. And He knows whatever there is in the land and in the sea; not a leaf falls, but he knows it. There is not a grain in the darkness of the earth nor anything fresh or dry, but is written in a Clear Record. [Quran 6: 59]

60. For those who believe not in the Hereafter is an evil description, and for Allah is the highest description. And He is the All-Mighty, the All-Wise. [Quran 16: 60]

24. He is Allah, the Creator, the Inventor of all things, the Bestower of forms. To Him belong the Best Names. All that is in the heavens and the earth glorify Him. And He is the All-Mighty, the All-Wise. [Quran 59: 22-24]

1. Hâ-Mîm. 2. The revelation of the Book is from Allah, the All-Mighty, the All-Knower. 3. The Forgiver of sin, the Acceptor of repentance, the Severe in punishment, the Bestower (of favours). Lâ ilâha illâ Huwa (none has the right to be worshipped but He), to Him is the final return. [Quran 40: 1-3]

68. They (Jews, Christians and pagans) say: “Allah has begotten a son (children).” Glory is to Him! He is Rich (Free of all needs). His is all that is in the heavens and all that is in the earth. No warrant you have for this. Do you say against Allah what you know not. [Quran 10: 68]

4. Had Allah willed to take a son (or offspring), He could have chosen whom He willed out of those whom He created. But glory be to Him! (He is above such things). He is Allah, the One, the Irresistible. 5. He has created the heavens and the earth with truth. He makes the night to go in the day and makes the day to go in the night. And He has subjected the sun and the moon. Each running (on a fixed course) for an appointed term. Verily, He is the All-Mighty, the Oft-Forgiving. [Quran 39: 4-5]

101. He is the Originator of the heavens and the earth. How can He have children when He has no wife? He created all things and He is the All-Knower of everything. [Quran 6: 101]

21. Or do those who earn evil deeds think that We shall hold them equal with those who believe and do righteous good deeds, in their present life and after their death? Worst is the judgement that they make.

22. And Allah has created the heavens and the earth with truth, in order that each person may be recompensed what he has earned, and they will not be wronged. [Quran 45: 21-22]

35. Shall We then treat the Muslims like the criminals?

49. And the Book (one’s Record) will be placed (in the right hand for a believer, and in the left hand for a disbeliever), and you will see the criminals fearful of that which is (recorded) therein. They will say: “Woe to us! What sort of Book is this that leaves neither a small thing nor a big thing, but has recorded it with numbers!” And they will find all that they did, placed before them, and your Lord treats no one with injustice. [Quran 18: 49]