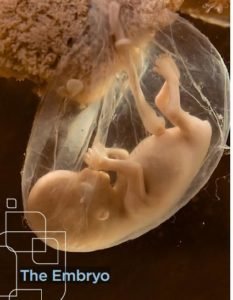 Miracles of the Qur’an : The Embryo

From the beginning stages of development, the Qur’an accurately portrays the growth of the embryo. Firstly, is the ‘Nutfah’ or drop stage: this is when a sperm combines with the female egg to form the zygote which has the shape of a drop of fluid; hence the name ‘Nutfah’.

The following stage is the ‘Alaqah’; which in Arabic has three meanings; leech, suspended thing and blood clot. The embryo not only resembles a leech, but it also uses the mother’s blood to feed from. As it grows, it starts to take on a form which holds onto the womb of the mother, as if suspended. The final step of the ‘Alaqah’ stage is where the embryo takes on large amounts of blood from the mother; the fact that the blood does not begin to circulate at this time makes it look like a blood clot.

Next is the ‘Mudghah’ stage. In Arabic this has the same meaning as a chewed-like substance. The growing spine of the baby resembles that of a chewed substance. After that comes ‘Izam’. The next stage described in the Qur’an is that of the bones being clothed with flesh which accurately describes how the muscles start to form around the bones.

What has been revealed to us in the Qur’an about embryology over 1400 years ago has only been discovered by modern science in the last few decades.

What has been revealed to us in the Qur’an about embryology over 1400 years ago has only been discovered by modern science in the last few decades. Even as late as the 17th century, with the invention of the microscope, it was believed that sperm contained miniature human beings.

“And certainly did We create man from an extract of clay. Then we placed him as a sperm – drop in a firm lodging [i.e. the womb]. Then we made the clot into a lump [of flesh], and We made [from] the lump, bones, and We covered the bones with flesh; then We developed him into another creation. So blessed is Allah, the best of Creators.” (Qur’an 23: 12-14)