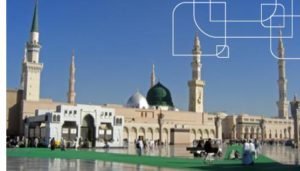 One of the earliest mosques built in Islam was the one built in Al-Madinah by the prophet Muhammad in the year 622 CE. It was a very simple structure made from adobe bricks and stone.

Adjacent to the mosque was the modest house of the prophet Muhammad in which he was later buried along with two of his companions; Abu Bakr As-Saddiq and Umar Ibn Al-Khattab. The mosque acted as a centre for the community, not only allowing facilities for learning and celebrations, but distributing charity, writing to other heads
of state and meeting delegations. After the establishment of the mosque, the Muslim community spread around it so that it became the very heart of the state.

Successive expansions throughout history have made the prophet’s Mosque the magnificent architectural masterpiece it is today. Adjacent to the mosque is the beautiful green dome under which the grave of prophet Muhammad can be found.

There is an area within the Mosque, between the the pulpit and the grave of prophet Mohammed, called “Ar-Rawda As-Shareefa” where Muslims prefer to pray as they consider the area a place from Paradise.