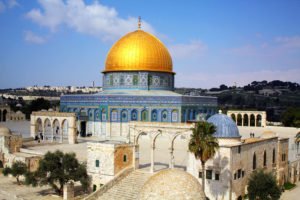 “Exalted is He who took His Servant [prophet Muhammad] by night from Al-Masjid Al-Haram to Al-Masjid Al-Aqsa, whose surroundings We have blessed, to show him of Our signs. Indeed, He is the Hearing, the Seeing.” (Qur’an 17, 1)

Al-Aqsa Mosque in the city of Al-Quds (Jerusalem) is the third holiest site in Islam. It is dear to the hearts of Muslims as it was the first mosque that they turned to in prayer before the Ka’bah. It is also the mosque that the prophet Muhammad was taken to on the night journey (Isra` and Miraaj) and the place where he led all the prophets in prayer.

Al-Aqsa Mosque is the entire noble sanctuary, which includes not only Umar’s Mosque but also the Dome of the Rock and other landmarks inside the stone fence totalling more than 200 places. The entire area covers over 144,000 square metres and encompasses over one sixth of Jerusalem’s old city. Prayer anywhere within the enclosed sanctuary will be weighed 500 times more than prayer in a regular mosque, in terms of reward.