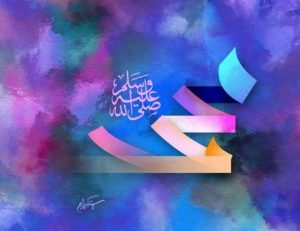 Abdullah ibn al-Harith, one of his companions said: I never saw anyone who smiled more than Allah’s messenger.

A’ishah, his wife, said: The Prophet spoke in a simple and clear way so that all those who heard him understood him.

A’ishah said: Whenever the Prophet was given a choice (between two things) he chose whatever was easier, unless it was sinful, in which case he was more careful than anyone to avoid it.

If greatness of purpose, smallness of means, and astounding results are the three criteria of human genius, who could dare to compare any great man in modern history with Muhammad?

He was Caesar and Pope in one; but he was Pope without Pope’s pretensions, Caesar without the legions of Caesar: without a standing army, without a bodyguard, without a palace, without a fixed revenue; if ever any man had the right to say that he ruled by the right divine, it was Mohammed, for he had all the power without its instruments and without its supports. (Bosworth Smith, Muhammad and Muhammedanism, London, 1874, p. 92)

It is impossible for anyone who studies the life and character of the great Prophet of Arabia, who knows how he taught and how he lived, to feel anything but reverence for that mighty Prophet, one of the great messengers of the Supreme. And although in what I put to you I shall say many things which may be familiar to many, yet I myself feel whenever I re-read them, a new way of admiration, a new sense of reverence for that mighty Arabian teacher. (Annie Besant, The Life and Teachings of Muhammad, Madras, 1932, p. 4)

Mahatma Gandhi, speaking on the character of Muhammad, says in (Young India):

I wanted to know the best of one who holds today’s undisputed sway over the hearts of millions of mankind….I became more than convinced that it was not the sword that won a place for Islam in those days in the scheme of life. It was the rigid simplicity, the utter self-effacement of the Prophet, the scrupulous regard for his pledges, his intense devotion to his friends and followers, his intrepidity, his fearlessness, his absolute trust in God and in his own mission. These and not the sword carried everything before them and surmounted every obstacle. When I closed the 2nd volume (of the Prophet’s biography), I was sorry there was not more for me to read of the great life.

Prof. C. Snouck Hurgronje had the following to say:

The league of nations founded by the prophet of Islam put the principle of international unity and human brotherhood on such universal foundations as to show candle to other nations.” He continues: “The fact is that no nation of the world can show a parallel to what Islam has done towards the realization of the idea of the League of Nations.

If a man like Mohammed were to assume the dictatorship of the modern world, he would succeed in solving its problems that would bring it the much needed peace and happiness.